Tattoos were once only seen on soldiers, sailors, wharfies and bikies, but the widespread popularity of body art can now be seen on more and more AFL stars.

And many are from subtle works of ink art with full sleeves, neck tattoos, and large-scale designs inked on the back popular with players from just about every club.

Like beards, tattoos are trendy, but it turns out many of the game’s biggest names have been inked for surprisingly personal reasons. Here are just a few of their stories. Leroy Jetta often thinks of his brother Jordan, whom he lost to cancer. Source: News Limited

Essendon forward Leroy Jetta’s shoulder blade tattoo is an ink homage to his younger brother Jordan who lost his battle with cancer in 2001. He had the tattoo done in 2008.

“I wanted to have something to remember him by … my girlfriend Kaisha just thought it would be good to get a portrait of him,” he said.

“I’ve never really felt comfortable talking about it to anyone. I’ve spoken to ‘Rama’ (former teammate and cancer survivor Adam Ramanauskas), he knows about it.”

“He said he knew what I was going through and just to keep my head up and keep playing footy and enjoying life,” he said.

A portrait of his grandmother sits on the right side of the tattoo.

Jetta has other tattoos that mean a lot to the gun forward, including an Aboriginal flag tattoo on his ribs as a nod to his indigenous heritage and the names of his twin boys- Jhye and Levi- written on his chest. The boys were born in 2010. Leroy Jetta’s other tatts are on show here at a team cool-down session. Source: HeraldSun Buddy Franklin’s tatts are almost as famous as he is, and the newest Sydney Swan has quite a collection of body art.

His right arm features a tattoo of his mother’s face and name next to a flower and above a skull.

He also has the face of the elder who gave his nickname on his left arm.

His left full sleeve features a series of indigenous inspired motifs including a kangaroo and a didgeridoo.

The elder design impressed American tattoo expert Rachel Larratt, who offered up her expert opinion on AFL stars and their tattoos.

“That one doesn’t actually look that bad. The portrait looks good,” she said. Dustin Martin has tattoos on both arms and his neck. Picture: Darrian Traynor/Getty ImagesSource: Getty Images

Richmond’s Dustin Martin has a series of tattoos, one of which mirror designs also inked on his father Shane.

Dustin has the Maori words “Ngati Maru”, a reference to his extended family’s North Island tribe and their meeting place known as “Matai Whetu” is also written on his neck. He got the neck ink in 2010.

Dustin and Dad Shane both have the words “Live Free. Die Free” written on their chests.

“Me and Dad got it and it is just kind of a saying that we came up with together,” Martin said.

“He’s been a great support, as has all my family. They have been a big part of getting me here.”

Last July Martin added a large tattoo that covers much of his wrist, right hand and forearm that features a skull and bundles of cash. Travis Cloke’s epic back tattoo, which features angel wings and his personal slogan “Strength, Determination, Belief,” is rarely on show — and that’s just the way his mum likes it.

“I have thought about the sleeves, but Mum keeps saying, ‘No, don’t touch the arms. You can cover up now’,” Cloke told our own Jon Ralph.

“The way I see it, I can’t see any of it now. I have got a few little ones with meanings and numbers and quotes — things that mean something to me and the writing on my back, which Cam has got as well.”

Cloke’s body art also extends to the recently unveiled leg ink featuring the words “life is precious, worth the fight.” Melbourne’s Nathan Jones has many tattoos, but it’s the one of his grandfather, which features on his forearm, that has a personal touch.

The image shows his grandfather as a young man and won praise from tattoo expert Rachel Larratt.

“It looks like it’s actually pretty good and that it was a full concept,” she said. “That’s probably one of the best ones I’ve seen in this whole group.” Jones also has his family name and a full sleeve of tattoos. Source: HeraldSun 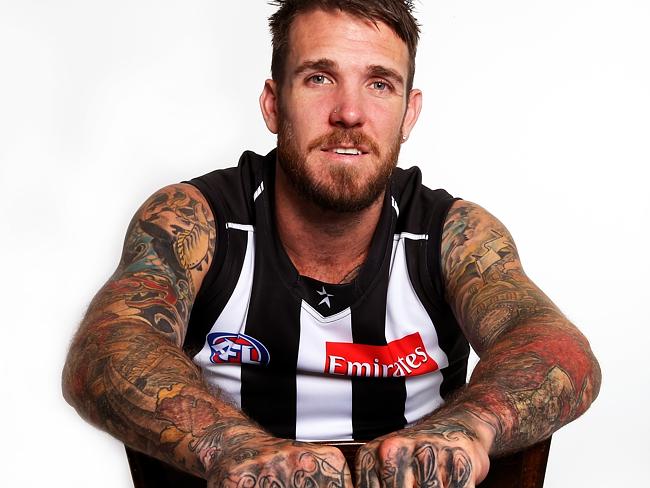 Dane Swan has tattoos all over his body but won’t get any on his neck. Source: News Limited

Dane Swan is quickly becoming one of the most heavily tattooed players in the game.

While there is ink over most of his body, he has promised his mum he won’t get anything done on his neck.

“I’ve probably got too many for them (his mum and dad) to worry about,” he said.

“But she just doesn’t want me to get them on my neck.”

He has the words “good” and “life” tattooed on his knuckles, Buddha and the devil on his foot, two full sleeves with intricate designs representing good and bad, plus a skull and a face on his leg.

There is meaning behind some of the tattoos.

“The only tattoos which are of real significance are my premierships tattoo on my leg and the family motto which is across my stomach,” he said.

But last year as part of an elaborate gag, Swan briefly shed his body ink, with the help of some crafty make-up artists.

While Swan was the first to admit it looked it odd, he thought the hours he spent in the make-up chair were well worth it.

“Pranking the boys and seeing Robert Harvey and Heath’s reaction was worth it — and the boys all said I looked younger.”

But he also said his mother would be happy if he kept the tatt free look.

Yet there’s one area of his body he plans to get tattooed in the future. Dayne Beams has heard it all when it comes to what fans think of that sleeve. Picture: Wayne Ludbey Source: News Limited

As one of the most famous inked players in the league, Dayne Beams is the first to admit he knows what people think of the sleeve he got at age 17.

“I was young and I was getting a tattoo under-age. I thought it was being really cool,” he said.

But he says, he’s not bothered by the bad reviews footy fans are all to happy to offer up on his body art: “People hang on the fence and tell me I have s**t tatts all the time.”

The intricate design includes a spider, flames, dice and an Eight ball.

He admits that if given his time over again, he probably would have gone with a different design.

He also has the words Fortius Quo Fidelius or Strength Through Loyalty tattooed across his chest which was the motto of his junior football team. It’s also the club motto at St Kilda.

He has another tattoo on one thigh.

Tattoos it seems are a bit of passion with the Beams family, as Dayne’s mother has had her children’s names inked on and she’s encouraged him to get more tatts.

And if you’ve ever wondered how tatts look years later … Fitzroy champion Kevin Murray got tattoos on his arms at a time when ink of any kind was frowned upon.

The 1969 Brownlow medallist who played from the mid ‘50s until 1974, was as famous for his arm art as he was for his hard work and talent.

The 31-year-old wore a long-sleeved guernsey when he received football’s highest honour at his parents’ request, as they wanted him to cover up his tattoos.

“When I won the Brownlow Medal in 1969 my father asked me to wear a long-sleeved jumper to cover up the tattoos when I ran the final lap to collect the medal,” he told aflplayers.com.au.

“Of course I did this but afterwards quite a few Fitzroy supporters contacted me to say they were disappointed that I had worn a long sleeved jumper and didn’t have my tattoos showing as they had become somewhat of a trademark.”

This article was originally published in the Herald Sun and can be accessed here.