Donna, after discussing women’s footy over coffee with a friend, was in disbelief over the lack of protective wear available to women.

It was then that Brad and Donna decided to conduct their own research, in a moment that would mark the beginning of Zena Sport.

“We did our own research project and we found that a lot of the girls were either wearing two crop tops or taping themselves (their breasts) up to be protected, and we thought, ‘There’s got to be a better solution’,” Brad told aflplayers.com.au.

Despite holding no manufacturing experience, the Western Bulldogs games record holder and wife Donna then set about finding that solution.

“We had to learn so much as a family and we built a little team around us, including a designer out of Sydney who had experience in bringing garments to life,” he said.

“We’ve still got so much to learn as a business, but we’re 100 per cent in, because we feel what we’ve been able to create is going to be really positive for so many players and athletes across various sports.” 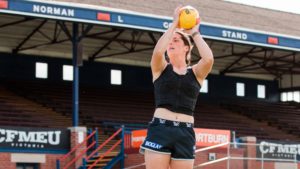 With a priority on the garment’s padding, the Johnsons are now producing an advanced impact protection vest, which moulds to the body, weighs only 160 grams, and is designed to absorb high-level impact.

The vest, which is not visible under the player’s jumper, also negates the impact of falls from contests, as well as scratches and abrasions from tackling.

“Once you put it on, the padding will mould around you nicely and the vest won’t move at all,” Johnson said.

“We worked with the AFL to make sure that the vests we were producing were going to be able to withstand the rigours of AFLW football.

“The girls are loving it. They’re absorbing contact and it’s making them feel better post-game in recovery as well.”

“It resonated with me because three years ago I had a bit of a breast scare myself, so I was looking around to see if there was any protection out there,” Antonio said.

“It’s one of those conversations that girls sometimes find hard to have so it’s important with pieces like this to normalise the conversation around it.”

Antonio had to have an ultrasound after copping a few stray elbows and knocks to the breast area.

“I had a bit of breast trauma so I went and got an MRI and had to have a few other tests over a few days,” Antonio said.

“It was a bit scary there for a while because I had to get a mammogram and my Nana had just been diagnosed with breast cancer as well, so that’s why I did check. Luckily, I did and that’s when I looked at the options out there for protection.”

“We’re pretty serious about the vest … we’re making sure we’ll continue that relationship with Deakin to keep validating the vests and make the appropriate adjustments that we need to along the way,” he said.

“All the elements of the vest are really standing up at the moment.”

As the AFLW rapidly grows, Johnson says innovation on protective gear will support the confidence of women across all sports.

“We’ve got an 18-year-old daughter (Ella), so we’ve been following sport for a number of years in the female space and we absolutely love it,” he said.

“There were products out there that might’ve been a more unisex type scenario, or more based around moulding to the male body.

“We have to have that ability to provide for females so they can conquer the field or the mat or the court, or anything that they choose to participate in.”

Antonio said she had noticed that wearing the vest had become a normal part of preparation for more players.

“More girls are starting to wear it now and the thing that I’ve found is that it’s actually starting conversations around why I’m wearing it that’s a really important thing,” Antonio said.

The vest caters to all sportswomen, from those playing in the AFLW to aspiring athletes in junior ranks.

“We all know everyone’s development comes at a different time,” he said.

“If we can assist the girls that are trying to find their way in the game, and some that have that want to go to a different level, the vest caters for everyone.”